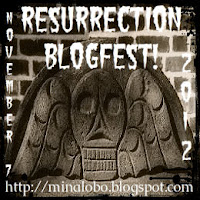 For this entry to Gothma Mina Lobo's first blogfest competition, I have chosen a post dating back to 'Friday 20th May 2011'.

It deals with a passion and a love of mine, and the whole kick-start for this blog: traditional pencil & paper role playing ~ and begins with the very first game I ever received: Snapshot, and little did I realise this would shape the future for me both as a gamer and as a potential wannabe writer of fiction.

I seriously hope you enjoy the read and for some, draws you in enough to encourage you to read over my past blog posts. I thank you for your time and patience in reading this :)

Snapshot arrives... the birth of 'EvilDM'

It was Christmas morning, frost coated the inside of my bedroom window and the air literally froze you to the core.  Now, you must bear in mind, this is a time when the family home I lived and grew up in did not have central heating, no double glazing, a fireplace in each bedroom, nor did we have a phone - and yes, our television was black & white, with access to three channels only.  That's the way it was.  But I digress.

With steaming breath, I peeled back the ten or so blankets pinning me to the bed to the accompaniment of a slapping, gurgling thud, as a stone-cold water bottle falls from the release of blankets.  But to be honest, I'm all focused on the wrapped parcels waiting for me under the tree in the front room of our house.  A little information regarding 'the front room': it was a 'special' room - a room kept for special occasions, for example, family gatherings like Christmas, but never to be used for any other purpose ( although I do remember being locked out as a child when my father and brother were glueing together an Airfix 'Flying Fortress' model, much to my frustration and thumping on said door - although I do recall eventually getting my hands on said model, and oh, how it broke apart ).

I always loved the smell of that room; the air cold and slightly damp mingled with the pine needle smell of the tree, the citrus aroma of satsumas and tangerines ( only ever bought at Christmas, along with cartons of dates bearing the drawing of a desert landscape and camels.  I was warned, on pain of the slipper, NOT to touch anything in that room until Christmas day itself! ), and now being of a more 'responsible' age I was trusted to be in the room alone.  Dutifully I lit the gas fire and waited for the rest of the family to awaken.  The hours crawled around the clock on the mantlepiece, but in fact it was most likely no more than half an hour that I waited, my eyes greedily locked on the brightly wrapped presents, all of which I had mentally memorized as to which were mine - secret late night trips into the front room were required, and necessary, in order to establish the following:

My only thoughts were for one present and one present alone: 'Snapshot'.  John, my big brother, was good to his word.  The moment finally arrived.  The family sat in the front room and one of my sisters doled out the presents.  Amongst the 'coming of age' style presents like aftershave and deodorant (personally, I wasn't blessed with a full face of hair, nor, to my knowledge, did I smell repulsive?), was the thing I wanted most badly.  Snapshot! 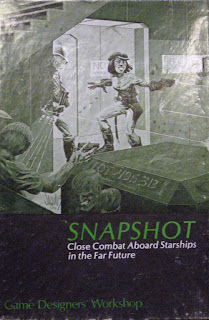 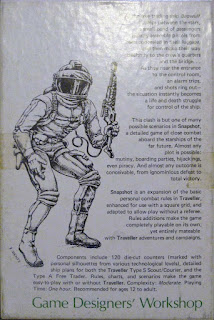 To the right is the original game box cover, the artwork of which made my imagination thrum with excited anticipation of all the spaceship combat and boarding actions that would take place.
Information given on the back cover was just tantalisingly enough to make me want to rip open the cover and get my grubby little hands on the contents - and that space-suited guy just added fuel to my imagined fire.

I think the word 'disappointed' would not adequately cover my reaction the very first moment I laid the contents out on my bed.  Six-sided, white dice rattled about inside the box, each roughly 1cm square ( or half an inch if you still use imperial ) - great!  Booklets, containing tables, numbers, and rule after rule - oh, and there were the ship plans.  In total I was gutted.  An imagination can be a cruel thing, a double-edged sword, if you will.  You may think I was being ungrateful.  But that isn't the case.  It was just that my imagination had hoodwinked me into believing the game would be something totally different.  But what it did make me realise, was the fact I was entering a different league of gaming.  Long gone were the days of Monopoly, Ghost Train, Haunted House and that bloody infuriating Mouse Trap.

I was now on the path of something far more reaching, something that would literally reshape my way of thinking and moulding my imagination into a device for creating a plethora of worlds, populated by myriad of peoples and creatures alike.  My very own universe in which I welcomed my closest friends to travel through, experience and mould for their own pleasure.

Little did I know on that cold, Christmas day that the seeds of the 'Evil DM' had been sown and were already beginning to grow.  I needed more.  My mission was clear - I needed more material for this 'Traveller' universe if I was going to truly be the master.
Scribed and delivered by Mark K at 12:15 am

Email ThisBlogThis!Share to TwitterShare to FacebookShare to Pinterest
Labels: Blog

My first foray into fantasy gaming was the Steve Jackson and Ian Livingstone Fighting Fantasy books. I got the Warlock of Firetop Mountain when I was about nine and I haven't looked back. Did you know that you can get some of those titles as apps on your iPad now? They do the character creation and have sound effects and all the original books and artwork pages are in there too. It's ace. A real trip down Nostalgia Avenue.

Then, when I moved to Cardiff, Mam and Dad bought me the first three books of Dragon Warriors that I still have. The rest as you know Mark, is History.

Oh those heady days of freedom and role playing. Maybe you should peruse the rest of my first years posts regarding role playing?

Great story....I loved the build up to THE PRESENT. Reminds me a bit of Ralphie Parker and his 'Red Rider BB Gun with the compass in the stock and this thing which tells time'.

Even though I'm not a gamer I still enjoyed this post. It's funny how we may be disappointed with the turnout of a specific event, but with hindsight realize it was probably the best thing that could have happened. (:

I've dabbled with pnp RPGs, mainly the old D&D, but most of my board gaming was strategy and war gaming. Star Fleet Battles was the biggie for me. For role playing, I've mostly loved playing older cRPG's (like Baldur's Gate I & II).

Thank you, sir! Nice to meet a fellow gamer :)

Not a gamer!? Not even Monopoly? You really have missed out on something special ;)

Thank you, JoJo. Out of all the comments I receive, I always enjoy yours and place them amongst the best :)
- though I know not of this 'Ralphie Parker' you speak of?

Nice post! I know how our imagination, as children, can work us up to a very high peak, only to let us fall into the darkest dungeons of disappointment. I'm glad it was the beginning of something great for you. =)

Thank you, Gina for both understanding and the kind words :)

Well, yes, Monopoly. I even played Super Mario Bros when it first came out on the NES...but that only lasted a few years and I wouldn't call myself a real gamer. The only thing I still play today is Tetris on my old gameboy, usually in airport terminals...Yep, I'm old. (:

ROTFL, Mark, "...on pain of the slipper..." and "...that bloody infuriating Mouse Trap." Hah! Loved it, and I dig a Christmas story, generally. Thanks for participating in my Blogfest, Evil Dude! ;-)
Some Dark Romantic

LOVED this entry. Congrats on being one of the finalist! Well deserved.

:) This is such an awesome story. It reminded me of my childhood. My dad didn't like to run the heat either. haha. I remember making dinner in the kitchen with my coat on, because the living room was the only room with a fire-place.

And Mouse-Trap. Sigh. I had hours of fun with that game--but only because I'd make up my own versions, not because I had the patience to set the damn thing up. haha THAT was one that was initially a disappointment for me. I wanted that damn game for months, and then I got it and it was SO complex for my little seven year old mind. lol. I loved the little net that would come down in the end and trap the mouse though. That made up for a lot!;)

Again...great post! This was definitely one of my faves.