An Acknowledgement and Thanks ...

Something I should have done at the very beginning of this blog, and it has been very remiss of me, I admit, is to say a big 'thank you' to all those players that have sat round the table with me.  I am aware that most likely 99% will never get to read this, but I feel strongly enough to do it.
A DM without players is just a person reading a book.

Read more »
Scribed and delivered by Mark K at 3:47 pm No comments:

Email ThisBlogThis!Share to TwitterShare to FacebookShare to Pinterest
Labels: DM Memoirs, RPG, Thanks

Each session begins with a recap from the previous week's events.  This is a good practice for two reasons - it helps to reinforce placement of characters, what's been gained, lost, destroyed and who needs healing or  the learning of new spells.  But primarily, it helps me to get things organised and in the mood for what lies ahead.

Read more »
Scribed and delivered by Mark K at 4:01 am No comments:

That's the funny thing about role playing games, in the planning phase as a DM you have all these little scenarios and threads mapped out (either on paper or in your head), and what happens?  It all goes tits up.

Read more »
Scribed and delivered by Mark K at 2:35 am No comments:

So, Tarl and Grudge (a.k.a. Neil (Cat) and Steven respectively) had been trawling about a number of small hamlets and the odd village, when our two erstwhile heroes stumble across a remote farm.  In dire need of provisions, and severely short of water, the companions take up a vantage point near the farm to discuss the next plan of action.
Read more »
Scribed and delivered by Mark K at 10:19 pm No comments:

Dragon Warriors - My Game of Choice. 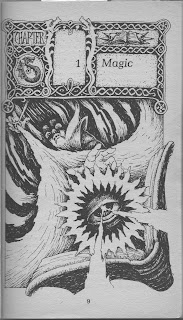 Dragon Warriors was my first ever rpg system for DM'ing.  It was basic, straight forward - a critical hit meant instant death - and easy to get into.  But the best part?  It was all contained within 6 paperback book volumes ... sheer bliss!

It's now twenty-plus years on from the first time I thumbed through the Dragon Warriors book set, and the books are decidedly delicate looking, and in need of some hard earned TLC.  The spines on two have been reinforced with sellotape; each volume has relevant sections tagged for quick and easy access - not that I really needed them, but in the heat of battle when a player would ask a question regarding a certain ruling, there it was at the tip of my fingers.


Read more »
Scribed and delivered by Mark K at 6:54 pm No comments:

Rummaging through my various boxes of stored rp gear I uncovered a long forgotten treasure, still in its box, the sellotape keeping it sealed browned and brittle.  It was a Great Spined Dragon.  Now a rare beast indeed, and still unassembled.

Old, But Not Forgotten

There are tables, then there are tables.  This particular table, albeit a rather light and tiny affair, holds a special place in my evil DM's heart as it was the first - yes, THE first gaming table from which I ran my opening role playing session.  And many more would follow.

Read more »
Scribed and delivered by Mark K at 9:42 pm No comments:

Yup, another year slowly rolls by, as if trying not to get noticed too closely.  But, even though my failing brain cells are becoming more forgetful, seemingly by the month, I am still conscious of the fact time skulks away like a reluctant party goer at a very dull and boring engagement party disco.
But worse -  I now no longer have an active role playing group.

Read more »
Scribed and delivered by Mark K at 11:42 am No comments:

Failure or mindset?  Looking back, this is the question I ask myself.  Why was I unable to garner interest in people to 'try' science fiction based role playing?  I think the answer lies in identity.  For some odd reason players I have gamed with have a difficult time connecting with a science fiction driven universe and all its modern trappings. Whereas its opposite number, fantasy, no problem.  Could it be an historical thing?  Or the fact that, as children, we are more often told and read stories firmly rooted within the 'traditional' fantasy setting of witches and fair young maidens, or of dragons and brave knights?  As opposed to battle-suited, laser-blasting troopers versus homicidal space amoeba within the depths of deepest, darkest space?

Read more »
Scribed and delivered by Mark K at 12:35 pm No comments:

Email ThisBlogThis!Share to TwitterShare to FacebookShare to Pinterest
Labels: RPG, Sci-fi vs Fantasy

Veering away from the history of my climb to DM notoriety - in a good way, naturally - I feel the need to jot down some thoughts, ideas and practices of my own, some of which I hope might help the budding Games Master (Dungeon Master for fantasy - I feel it fits in better).
This post is slightly longer than usual, so please, don't be put off.

Read more »
Scribed and delivered by Mark K at 2:39 pm No comments:

It's not all about space, you know!

For those of you kind enough to follow this sapling of a blog, I just wish to inform you that this will not be entirely about science fiction based rpgs. Far from it.  The fact is, the scfi-fi aspect of my rp experience most likely accounts for 20 - 25% of it, if that.  So there is a lot of fantasy rp tales of daring-do and fumbling to come.

Read more »
Scribed and delivered by Mark K at 1:28 pm No comments:

Email ThisBlogThis!Share to TwitterShare to FacebookShare to Pinterest
Labels: Dr. Who, Sci-fi

During my celestial search for adventurers willing to brave the depths of cold space and the quiet hum of a space craft engine (and my cups of tea/coffee), I stumbled across a little known gem of a rule book for tabletop sci-fi encounters/gun battles and the odd adventure in the form of 'Spacefarers'.

Read more »
Scribed and delivered by Mark K at 1:05 pm No comments:

If I am honest, I found the whole 'Traveller' rule set intimidating and often confusing.  But that didn't stop me from creating several planets, no end of NPCs and a rather flimsy plot-line.  So where were the players?

It would seem, back in the day, not many role players (of those within my circle) were very much into the idea of sci-fi rpgs.  I continued to collect various 'Traveller' scenarios, figures and even a whole campaign. Still no players though.

Move forward another year, and I discover a role playing group. Their game night is held once a week in a reception room at a rather seedy-looking hotel at the far end of St. Mary's Street in the heart of Cardiff city centre, literally within spitting distance of Cardiff Central Railway Station ... needless to say, not the safest of areas for folks to frequent after dark, let alone a teenage lad.  True what they say about ignorance, it covers you in a shield of fearlessness so you hadn't a clue as to what the heck was going on about you.

Read more »
Scribed and delivered by Mark K at 4:07 pm No comments: