I don't know how to title this post. Whatever I've considered just doesn't do it justice. To be honest, I've struggled immensely to sit down and write this, as I'm grieving so hard right now, as is my darling wife, but I don't want to leave it go any longer.

Our beautiful, gentle, loving girl, Darcy slipped away peacefully at home at 1430hrs on Monday 23rd August, with help from the vet. My wife cupped Darcy's head, giving her kisses and telling her how much we loved her and would miss her, as I stroked her neck and back.

The previous day she had been slow walking due to the arthritis in her back legs, but come Sunday night, Darcy kept pacing, panting and looked miserable, so Vanessa and I took her to the Emergency Animal Hospital in our area. This was around 2330hrs Sunday 22nd August.

Read more »
Scribed and delivered by Mark K at 6:40 pm No comments:

Back again, into the swing of punishing myself for goodness-knows-what kind of sins I acted out in my previous life, or lives?

Now the hamstring is quiet and behaving itself I've eased back into 'exercising' mode, albeit a late one again. But dammit, YouTube is the devil's work, and once you click on one, you click on another, and another... you get my drift.

I had good intentions to push this one through during the day. Anyway, what's done, and all that.

So rather than mention any particular 'Hell Set', I thought I'd just list the whole session below, followed by the usual musical offering.

Fini - cool down with stretches.

So there you have it. If any of that makes sense to you and you give it a go, have fun, but don't injure yourselves.

Now to the music. A great track I heard on late night tv in an ad for some perfume or other. I finally hunted it down and here it is, Emma Louise and 'Jungle' from 2012-ish.

Scribed and delivered by Mark K at 10:36 pm No comments:

Life is Full of Surprises.

Every now and then, life throws you a curve just to let you know it's not predictable and you don't know everything.

This is how it happened to me today. Out in the garden standing next to our goldfish pond - a small affair I built back in 2018, and populated it with six goldfish, some plants, including a water lily and some oxygenators (under water grasses) to keep the the O2 levels up and filter out other components from the water. 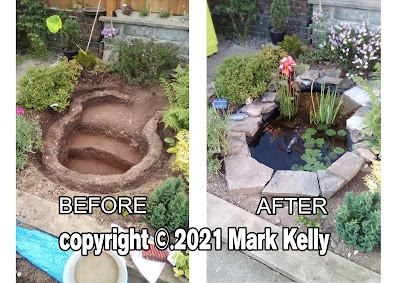 The images above are the 'before' and 'after'. All was going beautifully. The fish were happy and doing well, even to the point of becoming very hand-tame, swimming to the surface each time I placed my hand near. I thought it was for food, but even after feeding, the fish would follow my hand if I moved it through the water, some even swimming between my fingers and onto my palm. Amazing fish.

Then one vanished over night. No clue how, when or where. Just gone. A week later a second fish vanished in similar fashion. I was gutted. Following this, over a period of a month, the remaining fish became ill, dying one-by-one to some kind of fungal infection. No matter what I tried, it failed.

Read more »
Scribed and delivered by Mark K at 9:20 pm No comments:

The Psychology of Control.

Since this whole world seems to be turning upside-down I've been wondering 'How the hell can this be happening?'

Many out there will cite 'Orange Man Bad' as the reason, and even today, still have a bad case of 'anti-Trump' syndrome. But now the US has a senile, child-sniffing pervert for President, it seems that's ok, and everything he does, tries to say (when he can remember), or palms off to his female side-kick, Harris, doesn't raise even an eyebrow, especially with the mainstream media.

So all this madness had me baffled, perplexed, confused and even angry at times. But then I stumbled across this post by 'After Skool' on YouTube. I watched it, and God, does it all become so glaringly obvious!

(I also love the art work that goes into these videos)

Scribed and delivered by Mark K at 2:31 pm No comments:

Down The Rabbit Hole. Be Warned...

Not much I can say regarding this post, except that if you're watching this, then you have a mind that is enquiring enough to look a little further than the mainstream media would like.

It is a long one, an hour to be precise, but after watching this myself, I now feel that I have more pieces of the puzzle in place, have a more steadfast and positive position on my choices and now feel more justified in maintaining myself in a state of amber consciousness to everything going on around me and those I love and care for.

I understand this could divide many regular viewers to my blog, even losing some. But I rather that than blithely plod along in a conformist state of myopic obedience and not question everything, examine what's in front of me and look at what's outside of the box we live in.

Enjoy. Until next time... maybe.

Scribed and delivered by Mark K at 11:02 am No comments:

How does one define a muse? The dictionary definition would describe it as the following:

1. (In Greek and Roman mythology) each of nine Goddesses, the daughters of Zeus and Mnemosyne, who preside over the arts and sciences.
2. A person or personified force who is the source of inspiration for a creative artist.
Many an artist had a physical person as their muse, the object of their affection, desire and love - the latter being a hugely powerful force majeure upon the artist. One prime example is that of Yeats and his unrequited love for his 'muse', Maud Gonne, a driven English-born Irish republican revolutionary, suffragette and actress.
It would appear that his multiple rejected offers of marriage to Maud only spurred him to greater efforts and works of poetry.
Writing from the heart is a powerful, but draining experience, and any creative running off this mode of inspiration will soon run dry, or simply break, unable to control the turmoil of swelling emotion broiling from within, especially if it is based on a painful, disruptive, and sometimes toxic relationship.
Read more »
Scribed and delivered by Mark K at 7:47 pm No comments: 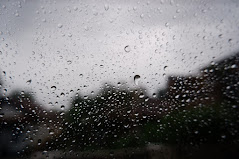 Read more »
Scribed and delivered by Mark K at 7:50 am No comments:

The glint in her eye was all he needed. Her heavy lashes batted seductively, framing the perfectly shaped iris, flecked with gold on a background of lavender. The stunning combination framed in an almond-shaped setting that took his breath away. A cascade of dark hair irritatingly hid half of her face, her head tilted forward enough to maintain the luscious veil in place.

For the briefest of moments Jack felt a total disconnect with reality and his body. That gold-flecked orb held him in its unflinching gaze. Everything else around this woman faded out of focus. She then blinked, a languid closing and opening.

Within his chest, Jack's heart thumped and lurched, as her unmistakeable gaze turned to a hard stare, the pupil of that eye, darker that the blackest of nights dilated as it locked onto him. The slightest hint of a smile touched the corner of her ruby red lips.

Jack's heart lurched within his chest.

Read more »
Scribed and delivered by Mark K at 10:31 am No comments:

And so August is upon us, but the weather is not so typical of the season. Windy-wet days interspersed with patchy sunny days, then overcast and ultimately baking hot sizzlers that turn your home into a storage heater, seeping out the day's heat throughout the evening and well into the night, making your sleep a sweat-soaked misery.

At least that's how it is here in the UK.

Moving on. The great beast that is the Massively Multiplayer Online Role Playing Game - what's happened to it? It hasn't gone anywhere, but it hasn't improved or moved forward - at least to my mind.

My very first MMORPG was the amazing Guild Wars - NOT 'Guild Wars 1', as many muppets keep referring to it, due to the fact a second game was released by ANet entitled, 'Guild Wars 2'.
From there I moved into World of Warcraft, dabbled with Age of Conan, and bounced in and out of WoW and Guild Wars & GWs2.

But something is missing from the genre. Many new developers are trying to find the 'thing' to reinvent the genre, but are falling short. It is a great shame, as the MMORPG can offer such a diverse and rewarding experience for those players invested in the lore, the characters and world settings.

So where does it go wrong?

Players. They moan about a game not adding anything new. They move on to new game territory, where they proceed to pick it apart, bemoaning that it is not like their previous game, which they cite as being much better (odd to say, but they do say it). Said players then return to old game, grind a bit, then moan about it, all the while keeping a beady eye open for any new MMORPG to fling its doors open. So the cycle repeats itself.

Humans (gamers) are odd creatures. They get set in their ways, distrust change, prefer familiarity even though they will complain about it, seek something new only to return to the old.

For developers they face the gaming equivalent of re-inventing the wheel. It will take a very brave, and skilled developer to come up with an MMORPG that breaks away from old 'traditions' and seeks to do something original, fresh and new. I very much doubt this will ever happen, as today's games are so heavily entrenched in sponsors, investors, boards of directors, shareholders, etc, that developers are hard pressed to release a game when the devs want to release it - good point in case: CD Projekt Red and their ruined baby 'Cyberpunk 2077'.

I can only hope that someday something amazing will manifest with the MMORPG genre and World of Warcraft will, once and for all, be laid to rest as the King of MMOs.

Scribed and delivered by Mark K at 10:11 pm No comments: