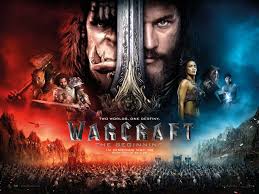 I love a good film. I love even more a film in the fantasy genre done with brilliant CGI. Now, combine this with a game franchise that has spanned 12 years, with its release back in November 2004, and you have the potential for a fantastic film and some very orgasmically happy World of Warcraft fans drooling and grinning from ear-to-ear.

Unless of course they screwed it up.

Before I go any further this will not contain any spoilers - so chill. I have been a WoW player on the Darkmoon Faire world server for over several years, but have since ceased playing, but the fond memories are still fresh and the screen shots great keep sakes.
With this in mind I was both reluctant and curious about this film. I wanted to see how one of the most influential grandparents of MMORPGs (the other being that of 'Guild Wars' - the original game released in tandem with WoW and not that pile of garbage, GWs2) has been transferred to the big screen.


It was in an Imax cinema in 3D that my nephew (also a former WoW player) and I sat and watched, (yes, with silly grins during the initial 20 minutes) as the world we knew as players unfolded before us on a scale unimagined. Like the true gaming nerd I could not help but point out landmarks from within the game that I recognised on screen. So yes, the film is true to the game world locations in name and film appearance. The main focus centred on Stormwind, though other locations get a brief showing and mention.

On the positive side, the Orc race is represented accurately as depicted within the game, and their immense physical size and power is made very apparent in brutal fashion, to a point where I wondered if anything, let anyone, could stand a chance against them. The use of magic within the film is not overly frequent, but when used is quite spectacular and encourages a slight nod of approval. The film doesn't feel like another LotR marathon, thank god. But I am under no doubt there will be more to follow.

Why do I say this, you might be wondering? The film, in essence, only scratches on the surface of  WoW lore and events leading to the creation of the WoW universe and the point from which MMO players within the game begin. If you are familiar with the game then you will understand how immense a telling 'Warcraft' has the potential to be, quite easily eclipsing both the LotR trilogy and Hobbit trilogy combined.

I'm never quite sure if combing live action and CGI is the way to go when dealing with true high fantasy, such as 'Warcraft', and from a personal perspective I feel it would have been better off as 100% CGI. I also felt some of the actor casting choices odd, even questionable.

Any players reading this might agree with what I'm about to say: all WoW promo trailers for their game expansions have been amazing to watch and set the heart and mind racing aflame, so why not do the same for the film itself?

The game world is a very colourful, vivid place - as you will see in the game trailer below - which has become one of the visual trademarks of the game, yet for me, the world within the film was drab and dull by comparison, almost bordering on the edge of boring. In size and scale, yes it was amazing, but that was all. No visual feast to excite the eyes in terms of colour and imagination.

The film does contain a couple of surprise moments which helped it along, but overall I feel it lacked that 'certain something' to elevate it to the same awe and wonder factor previous WoW game expansion promo trailers have evoked. I shall attach the film trailer below along with a game trailer and let you decide.

Warcraft is an 'ok' film and if I had to score it out of 10 I would have to give it a disappointing 5. Sorry people.

Scribed and delivered by Mark K at 8:33 pm