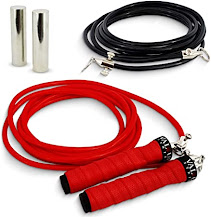 Day off from work today, and what a great day for exercising outdoors. Not too sunny, slightly overcast with a strong breeze. So kept nice and cool, and it made a refreshing change from the stuffy room I usually confine myself to.

The session today took over an hour, and was primarily jump rope and circuit based. Its format was 50 rotations of jump rope x 3 sets, super set with a circuit based exercise, again, x 3 sets, then a rest period of 2 minutes for stretching, then moving on to the next rotation. In total, there were five rotations.
Other kit used, besides the jump rope were: 2 x 20lb dumbbells and an 8lb medicine ball.

If truth be told, there was no particular set that could be deemed a 'Hell Set', it was all just hard. It would appear my left meniscus could be on its way out, but I knew that several years back. Time has caught up with me, so it might seem. But screw it, I'll just adapt and adjust, and play it out until I have no options left.

One thing I have learned, the hard way, is that surgery shouldn't be your first port of call. If anything, when it comes to your joints, seek every avenue prior to going under the knife.

Lastly, post session drink. I look forward to this the most. I use Hemp protein, mixed with creatine and egg white protein, one whole banana, four strawberries, a scoop of collagen powder, turmeric, cinnamon, a shake of crushed black pepper (it reacts with the turmeric, causing a greater increase in absorption of the curcumin), a tablespoon of organic MCT oil, semi-skimmed milk and probiotic yogurt, plus organic honey to take the edge off the Hemp protein's earthiness.

All that is left to do now is soak in the bath, chill for a bit, then hit the sack.

For your listening pleasure we go back to 1983 and a surprise number 1 hit for 'The Flying Pickets', and their cover version of Yazoo's, 'Only You'.

*A bit of trivia for you - back in the early 90s I had a bit part in some Welsh drama, playing Airport Security, and had the pleasure of working with the lead singer, Brian Hibbard, of this particular Flying Picket's song. Also a fellow Welshman, and a really nice, genuine fella. Sadly, Brian Hibbard died in 2012 from prostate cancer.